This article was published in the Fiji Times dated 12 May 1979.  The interviewer was Torika Tora of The Fiji Times.

A Girmit woman who came to Fiji when she was only 12 years old has recalled of her past experiences with the indentured labourers in Fiji and in South Africa.

Rangamma, who claims to be more than 100 years old, said life during this period was very tough.  We were whipped and left to starve if we were not able to complete a day’s work,’ she recalled.  She said at her age now she was beginning to feel the pain of the beating she used to get during the old days.

Rangamma left her hometown of Madras with her parents when she was only two years old. They went to work as indentured labourers in South Africa.  Her parents worked on a fruit farm near Capetown for nine years. When she turned eight she worked as a babysitter for a European couple who also had a fruit farm. She said the couple looked after her well during her three years of babysitting.

She said she still remembers African words for “where are, you going, come here” and other simple English words.

Her parents spent another year in Madras before they came to Fiji on the boat “Ganges” in 1899.

She said when they arrived in Fiji they were taken by boat again to Rakiraki where they worked on a vegetable farm belonging to Mr Freddy.

“In those days there were no roads and the islands were mainly thick forests, she said. 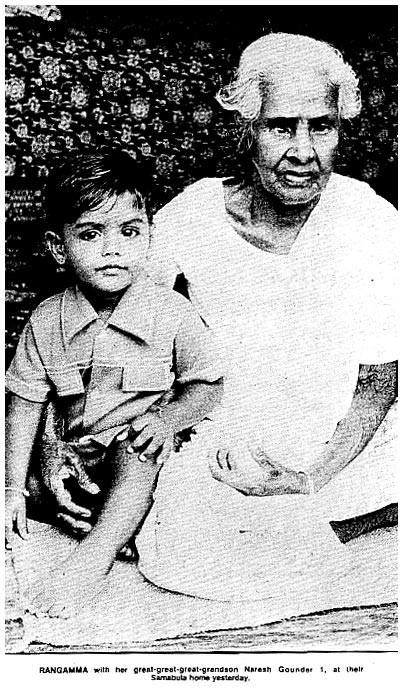 She said Mr Freddy had 100 workers working on his farm in Daboni, Rakiraki.

She said he was very cruel to his workers and whipped and beat them whenever their day’s work was not completed.

She said they were living. on two shillings and six¬pence per week and given a six months ration.

After the six months, their wages were increased to ten shillings without a supply of ration.

She said she recalled the day when the workers wrote a petition to an administrator in Suva against Mr Freddy’s ill-treatment.

She said because of this she was sentenced to seven days imprisonment at the Rakiraki prison by the local magistrate’s court, because she initiated the move. She said in those days they were very scared of the Fijian people.

They were huge, with big hair holding clubs and spears. They were also not well-covered.

We were very frightened of them because we learnt that they would eat human beings, Rangamma said. She said she met and married her husband Sari Gounder who was also a labourer on the farm.

She said after their five years contract with Mr Freddy, they came to Nausori with their three children.

Her husband worked at the Colonial Sugar Refining in Nausori for six months before they were transferred to work on a rubber plantation in Wainadoi, Lami for another six months.

She said a Mr Warren of the Soqulu Plantation in Taveuni offered the family a job as copra cutters on his estate where they worked for 30 years. Rangamma has a Fiji-born brother Kuswani who how lives in Taveuni.

Rangamma and Sari Gounder have eight children who now live in Taveuni and Suva.

She said her husband died in Taveuni a decade ago.

“I have so many great-grandchildren. I know their faces but I don’t remember their names, she said. Asked whether she would like to return to India, Rangamma replied: “Fiji is my place, there’s nobody in India for me.” She said she could not recall India