From 1879 to 1916, over 60,000 Indians migrated to Fiji under the Indentured Labourer Scheme. The British Government introduced the system to recruit labourers from India to work on plantations in Fiji.

The Indian Indentured Labourer collection held at the National Library of Australia includes immigration passes, general registers, plantation registers, repatriation registers and death registers. These records are used by many descendants to trace their ancestral roots from Fiji back to India and are inscribed on the UNESCO Memory of the World Register for their global significance. The National Library of Australia has worked with the National Archives of Fiji (custodians of this collection) to digitise and make records freely available via Trove.

The National Library of Australia interviewed me as part of the above project and referred Girmit.org as a website that offers a wealth of resources for family historians researching their Fiji Indian ancestry.

I copy the interview below, which is available at The National Library of Australia website

The term ‘Girmit’ coined from the (English) word ‘Agreement’ refers to the ‘The Indenture Agreement’ between the British Government and the Indians who apparently agreed to work in Fiji and other colonies for a service period of five years from the date of arrival in the Colony. The nature of labour was work in connection with the cultivation of the soil or the manufacture of the produce on any plantation. Furthermore, the ‘Agreement’ stated all the other conditions such as the number of days of work, the monthly or daily wages and the rates of pay and living conditions was part of the contract. This word is widely known amongst the Fiji Indians and also the Caribbean Indians whose ancestors travelled from India to the colonies.

What inspired you to set up this site?

In 2006, my daughter who was 3 at that time asked me ‘where did I come from’ because I wasn’t born in Australia. So, I started doing a bit of research and during this time my uncles from my dad’s side of the family were talking about doing a family reunion and that’s when I discovered my great-grandfather’s immigration pass and photos. I realised that the contents of the immigration pass were such a valuable piece of our history and then I started researching more. I finally published this information onto a website in 2008. So, the inspiration was my daughter, and the need to provide her with well researched data and complete information led me to establish this site.

The Indian immigration passes, 1879-1916 have been one of the most highly requested family history items at the National Library of Australia.  Why do you think it is so popular?

Since the establishment of Girmit.org and up until 2010 when I finally had a lot of content on the website, I have been providing this information utilising every online platform to share the link of the site and also posted blogs and articles with the aim to educate, and share the history that I thought was slowly being forgotten. I actively posted information and sent regular emails to people in my contact and also to my friends and family asking everyone to forward the link to others. Then I involved some prominent Fiji Indians in different countries including Australia, New Zealand, Canada and USA, who were all on board and helped share the information with a lot of people. This generated more and more interest and enabled people to contact NLA for the immigration passes, since NLA had a copy of the microfilms. I suppose there comes a time when people realise that our past has shaped our lives and many of us want to know more about it to appreciate it. 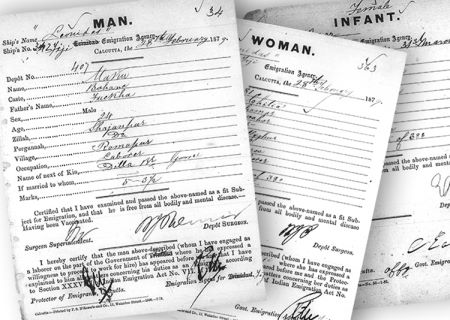 What impact will the digitisation of these records have for the descendants of immigrants researching their family history?

Firstly, I am so thankful and grateful that NLA has taken up this project. I don’t have words to express my gratitude. Once the records are available in a searchable database, people will be able to so easily access their ancestral data. This is very emotional for many Fiji Indian descendants and will enable people to find their origins back in India. The digitisation of the records will encourage more people to know and appreciate their past.

August is Family History Month. Do you have any advice or research tips to share with the novices beginning their Fiji Indian family history or for the more experienced researcher?

Some tips that I would share, is to talk to as many people within the family as you can. Make a Facebook family group and document every bit of your conversation. The most important part of research is that whatever information you get from anywhere about your family, write it down, keep on taking notes and then join the dots later. The time to start your research is now. Girmit.org is a good starting point. I read somewhere that, one thread alone is weak, but woven into something larger, surrounded by other threads of different colours is not only beautiful, but also stronger if we are part of a tapestry.